The 4 Most Common IT Myths

How many technology myths and misconceptions have you heard? How many have you believed? How many do you still think are true?

Published On: November 2, 2020 by Blake Schwank

The 4 Most Common IT Myths

How many technology myths and misconceptions have you heard? How many have you believed? How many do you still think are true?

The information technology landscape comes with many complexities, from the terms involved to the gadgets being used. Since the dawn of technology, we have been battling with the unknown and trying to wrap our heads around the whole concept. Continuous innovations and adaptations in this field have not made the process easy. With so many misconceptions in the world around us, what is true and what isn’t?

In our article, we specifically look at four common technology myths and misconceptions and separate the wheat from the chaff.

Check out our latest Tuesday Tech Tip video to find out some of the common IT myths: 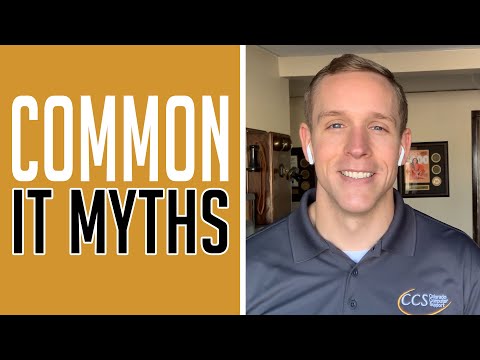 What Are The 4 Most Common IT Myths?

This myth is propagated by the fact that malware attacks are more common in Microsoft Windows computers than Apple Macintosh computers.

There are several reasons why this misconception is prevalent:

Although Macs are generally less vulnerable to viruses than PCs, they can still get infected with malware. Regardless of the type of computer you are using, it’s crucial to enhance your security by installing antivirus and anti-malware software to protect your computer.

In the past, it was dangerous to leave your machine plugged in all the time to an external power source. However, new technologies use either lithium-ion or lithium-polymer batteries that do not take more charge than they can store, making it safe to leave your computer plugged in.

With technology continually improving, the need to always have your laptop plugged in is slowing become extinct as we’re now seeing batteries that last longer than the eight-hour workday.

No matter what, your computer’s battery life will diminish the older it gets.

You Should Always Shut Down Your Computer at Night

Instead of shutting down your laptop, you can leave it in ‘sleep mode’ or ‘hibernation mode’ to save you the trouble of a boot-up every time you want to use it. However, shutting down your computer is a good idea as it will help its components rest, conserves power, and eliminates previous hitches you had encountered while working on it.

Something Deleted from the Recycle Bin Is Deleted Permanently

Well, not really. The truth is emptying the Recycle Bin doesn’t mean that you’ve lost the data you deleted. The icon may have disappeared, and some space might have been freed up, but the data is still there, and with the help of numerous applications, you can restore it.

Although it’s a good thing that you can recover accidentally deleted data, someone else can also recover sensitive data that you thought you had permanently deleted. To permanently delete data, you can use a file shredder tool that not only deletes but also overwrites the data.

Do any of these myths and misconceptions bring up questions on your data security?