Should You Run More than One Antivirus?

Do you have an antivirus installed and running on your systems? In today’s digital landscape, there are countless solid and efficient security solutions that can be downloaded without spending a dime.

Should You Run More than One Antivirus?

Do you have an antivirus installed and running on your systems? In today’s digital landscape, there are countless solid and efficient security solutions that can be downloaded without spending a dime. Due to the variety of antivirus solutions, this may tempt users to download and run more than one antivirus. After all, the more you run, the safer your systems will be, right? 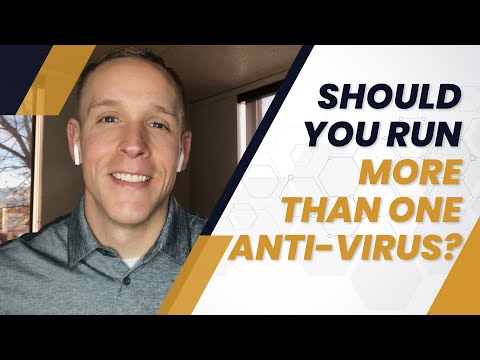 It Starts a Virus Race War

Imagine you are running more than one antivirus solution and you have enabled real-time scans for both solutions. A dangerous file has been downloaded or a suspicious link has been clicked, and both antivirus solutions detect something suspicious and send out an alert. Which antivirus will be the first to quarantine or remove the threat? When both antiviruses encounter the same threat, they will both try to do their job and remove the threat. However, if one antivirus has already removed the threat, you will receive continuous fake warnings regarding a virus even after it has already been removed, and this could become a problem for you. You may receive various error messages as files begin to disappear for one of the antivirus solutions as they attempt to quarantine. In some cases, neither of the antiviruses will be able to successfully quarantine or remove the threat.

Your Antiviruses Will Not Play Together

With the number of viruses and other threats rising, antivirus program manufacturers are doing their best to stand out in the crowd and prove that their antivirus solution is the best. By running more than one antivirus, you are running solutions that are rivals of each other. Your antiviruses will aim to block each other and remove them whenever they search for the applications that are programmed to send and monitor your system information. Your antiviruses will not only attempt to block suspicious links and files, but they will also try to block each other.

When antiviruses are working hard to protect your devices, they need to use certain resources in order to do their job. Your antivirus has to keep all eyes on any potential entry point that a virus can use on your devices. This can include inserting a flash drive to downloading a file from an email. Your antivirus will perform scans in real-time, and this will monitor any actions being performed on files and detect if it’s a virus.

When you are running only one antivirus, the solution will have enough room to get comfortable and do its job. However, when you are running more than one antivirus, you will begin to use more memory because all of your antiviruses are scanning every potential entry point. Unfortunately, this can lead to a device that will no longer have enough memory available for you to perform critical tasks. As a result, your device will begin to have performance issues.

Running more than one antivirus will decrease the effectiveness of your device without delivering any sort of benefit to you.

While you may have thought that running more than one antivirus could benefit you, it is obvious that installing and running more than one antivirus is not a good idea. If you are running an antivirus that is not performing well and you want to use a different solution, it will be better to remove that one before installing a new one. Before installing another antivirus program, perform thorough research and conduct an assessment of your systems to ensure you have the best antivirus that is capable of protecting your systems.

If you have an IT issue and you want to know if CCS can help you out with it, we would love to talk. Feel free to give us a phone call at 719-439-0599 or find us on the web at www.coloradosupport.com. Stay safe and have a virus-free day!

Thanks to our friends at GenerationIX in Los Angeles for their ongoing support.