How Long Was The First Jail Sentence For A Computer Network Hack?

Across time and history, whenever something good gets created, something or someone always finds an evil way to exploit its weaknesses.

How Long Was The First Jail Sentence For A Computer Network Hack?

Across time and history, whenever something good gets created, something or someone always finds an evil way to exploit its weaknesses. Take, for example, the modern-day computer you’d use at home or work.

It provides opportunities to grow a business, help students learn, and connect with others halfway around the world. However, hackers see this device as a way to disrupt, steal, and destroy. In today’s video, here’s what one hacker learned about his actions. 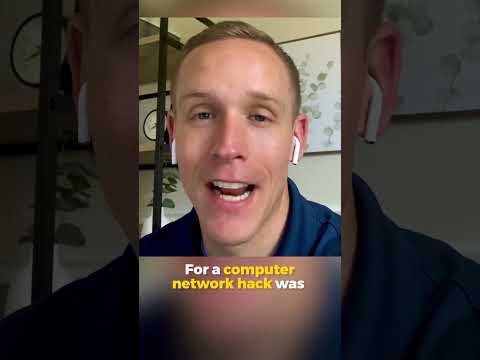 Who Is Kevin Mitnick?

On August 25, 1983, a twenty-three-year-old budding computer hacker named Kevin Mitnick was sentenced to a year in prison following his conviction on multiple counts of wire fraud. That made him the first person to be sentenced to jail, specifically for breaking into computer systems.

His crime spree began in 1981 when he used a fake ID to access a Pacific Bell switching station and make free phone calls. From there, he moved on to hacking into the computers of major corporations like Digital Equipment Corporation and Motorola.

In 1982, he was caught and arrested but escaped custody before the trial began. He was on the run for nearly two years before finally being apprehended in 1984. Following his arrest, he pleaded guilty to several charges and served five years in prison.

However, due to good behavior, he was released after four years. Since then, he has become a well-known security consultant and has spoken out against the harsh sentences often given to computer hackers.

Who Has The Longest Prison Sentence For Hacking?

On March 25, 2010, twenty-nine-year-old computer hacker and cyber-criminal Albert Gonzalez was sentenced to 20 years in federal prison. From 2005 to 2007, Gonzalez initiated the biggest credit card theft and sold 170,000,000 card and ATM numbers in United States history.

Gonzalez hacked into and stole information from Barnes & Noble, Office Max, TJ Max, Dave & Buster’s restaurant chain, and many other companies. He was also found guilty of the Heartland Payment Systems case.

Albert was found guilty during the trials of the federal indictments in New York, New Jersey, and Massachusetts. At his sentencing date, March 25, 2010, he was ordered to serve a combined 20 years for his crimes. His release date is scheduled for December 4, 2025.

Who Is The Most Famous Hacker Group In The World?

There are many famous hacker groups worldwide, such as Lizard Squad, Chaos Computer Club, The Legion of Doom, and Masters of Deception. However, one computer hacking group has stood the test of time and is known on all seven continents of the world.

That decentralized international activist and famous hacktivist collective and movement group is none other than “Anonymous!” Since its inception in 2003, this leaderless group has opposed Internet censorship and control at all levels.

Its actions and goals target corporations, organizations, and all governments that believe in and force censorship on their employees and citizens. Over the past two decades, the world has come to know and witnessed what Anonymous can do.

Here is a condensed timeline of some of their notably recognized disruptive events.

As with any group, Anonymous does have a brand. The “man without a head” emblem represents anonymity and a loyal leaderless organization. Those that support their causes refer to them as “freedom fighters” and modern-day digital Robin Hoods.

Computer hackers have tools and techniques most business owners or decision-makers are unaware of and the lengths they’ll go to get in. All it takes is one person or a global group targeting your business or organization and trying to hack your system and steal from you.

Colorado Computer Support provides hacking prevention and detection for your entire IT infrastructure. To keep those hackers away, contact us today or call (719) 310-3035 to prevent your system from getting hacked.