What The Heck Is PoE?

We know–there are so many technical terms out there. How are you supposed to keep up with them all? However, this one is pretty easy to understand. Power over Ethernet (PoE) is a great way to get better access and efficiency from your technology devices. As the name implies, PoE provides both power and internet access to a device from a single cable and port. It lets you set up devices in hard-to-access areas or locations without electric power.

We know–there are so many technical terms out there. How are you supposed to keep up with them all? However, this one is pretty easy to understand. Power over Ethernet (PoE) is a great way to get better access and efficiency from your technology devices. As the name implies, PoE provides both power and internet access to a device from a single cable and port. It lets you set up devices in hard-to-access areas or locations without electric power. 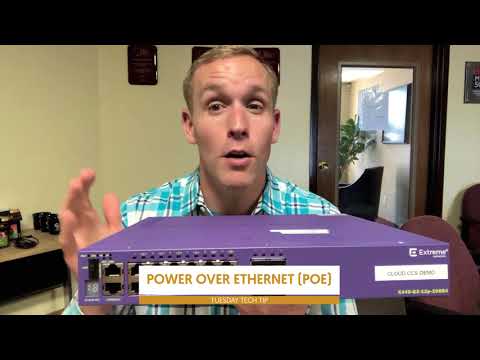 “How Does PoE Work?”

PoE uses your LAN (Local Area Network) switching infrastructure to provide power to a device over a copper Ethernet cable. Once known as “inline power,” it was originally developed by Cisco in 2000 to support emerging IP (Internet Protocol) telephony deployments.

PoE cable designs are standardized by the IEEE (the Institute of Electrical and Electronic Engineers). The original IEEE standard (IEEE 802.3af) provided up to 13-watts and was first used to power VoIP Phones.

In 2009, the IEEE standard 802.3at standard was released and provided up to 25.5 watts for devices such as Wireless Access Points (WAP), surveillance cameras, access control points, and wireless backhaul systems. (Wireless backhaul uses a wireless communications system to get data from a wireless device to a node in a major network like the Internet or proprietary network for a large organization.)

The IEEE Committee has now released a new standard (IEEE 802.3bt) which can power 70+ watts. In the future, the standard’s task force will consider increasing the power to 100 watts. With every change of the PoE standard, important issues must be considered, including link length and energy dissipation.

“What Devices Can Use PoE?”

PoE offers convenience and practicality for a wide assortment of electrical appliances. It can support standardized or ad hoc systems.

“What Are The Benefits Of Using PoE?”

Most Power over Ethernet setups are used for low-energy consumption devices that benefit from having a single cable transmit data and electrical power. For example, with a VoIP (Voice over Internet Protocol) phone, the PoE supplies the phone line, as well as the power required to light the display and perform functions on the handset. But today with the new higher wattage standard, you can drive so much more.

Safety– PoE protects network equipment from overloads, underpowering, or improper installation. It also allows you to apply security systems to your network.

Reliability – Because PoE power comes from a universally compatible source, you can back it up with an uninterruptible power supply (UPS) or use it to disable or reset devices.

Versatility & Scalability – You can locate your PoE powered devices anywhere and reposition them easily if needed. Unlike wireless technology, the PoE cable provides significant flexibility while maintaining a controlled system.

Enhanced Control – With devices connected to PoE, you can use applications to manage and control large spaces and create custom commands that can you can execute as needed.

“How Do You Install PoE Service?”

Adding POE to your network is pretty straightforward, but it’s best if you contact a professional like CCS to do this for you. You will need to inject power into your network, and we can do this for you with a network switch that has Power over Ethernet injection built-in. When we connect your network devices to the switch, it will detect whether they are POE-compatible and enable power automatically.

When necessary, we can use a midspan (PoE injector) to add Power over Ethernet capability to non-POE network links. Midspans can upgrade existing LAN installations to PoE. It provides a flexible solution in a situation where fewer PoE ports are needed.

Upgrading your network connections to PoE involves patching it through the midspan. Then, as with PoE switches, power injection is automatically controlled. PoE consumption on a switch can be monitored in real time along with port-specific information.

We can also use a PoE splitter to patch into a network connection. It converts the power to a lower voltage, which is required for IP cameras.

It’s important to note that these new power levels for IEEE802.3bt can cause performance issues and heat up a cable if you don’t use the right one. This can increase your chances of a productivity downtime and may also damage the cable itself. And if your cables are packed too tightly in their trays and pathways, the chance for heat increases because it doesn’t have a chance to dissipate.

This is why it’s important to have a provider like Colorado Computer Support install your PoE system and cables.  We’ll select the right kind of cabling and install it properly to avoid performance issues.

“Wow – Thanks! This Is Great To Know. How Do I Get Started?”

If you have questions or want to learn more about how you can put PoE technology to good use around the office, be sure to contact Colorado Computer Support in Colorado Springs. Give us a call at 719.439.0599 or complete our simple contact form at https://www.coloradosupport.com/contact-us/.